To be a renowned school of an international repute in the provision of high quality teacher education and technology-enabled education.

Benjamin William Mkapa (BMW),SUZA Campus at Mchangamdogo in North Pemba was officially inaugurated on Tuesday,the25th August, 2015by the Honourable Dr. Ali Mohamed Shein, the President of Zanzibar and Chairman of the Revolutionary Council also the Chancellor of the State University of Zanzibar (SUZA).

The BWMTTC initially started as an annex of the then Nkrumah Teachers Training College (NTTC) Unguja now a SUZA campus housing the School of Kiswahili and Foreign Languages (SKFL)at Beit el Raas.

In September 2001, the Nkrumah Teachers College Pemba Branch, the annex of NTTC Unguja was established.

The English Corner at BMW 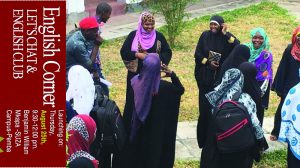 The School of Education (SoE) established English corner in 2016 at Benjamin WilliamMkapa SUZA Campus. The original idea to adopt and adapt ‘English corner as practiced in Renmin University’ was initiated by the Vice Chancellor of the State University of Zanzibar, Prof. Idris A. Rai after his official visit in Beijing, China. The English Corner  atBMW Campus was originally implemented to support student teachers in science with limited English to improve oral English skills through informal face to face and one to one discussion sessions in English. The students work in pairs, gather in large group or just mill around. These ‘out of class’ sessions are led by BWM teachers, invited guests or volunteers who are non-native or native speakers of English. Initially, the participation in the English Corner was mandatory (mandatory attendance). After the pilot year, SoE decided to make it optional to give students the freedom to participate as per their university schedule.